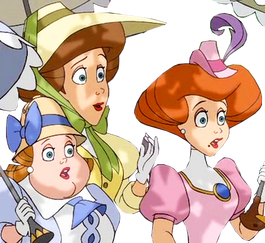 Hazel, Greenly, and Eleanor are three upper-class women and Jane's friends from England in Disney's The Legend of Tarzan.

By chronological standards, they first appear in this episode, where they came to the jungle to "save" Jane from Tarzan because they thought that she was unhappy in the jungle and being held against her will. They had arrived courtesy of Gerald (the same ship-captain from the 1999 film who brought Archimedes, Jane and Clayton to Africa) who attempted to correct them that Jane had refused to return to England on purpose, but wasn't successful until they do reunite with Jane. When she tried to show them that she was still the same polished girl they knew from London by throwing a typical English picnic, she asked that Tarzan wear his father's suit. Tarzan, thinking Jane was embarrassed by him, wasn't too thrilled on "being something he wasn't", but after a heart to heart talk with the Professor he put on the suit. Meanwhile, Jane and her friends were being chased by the Panthers Sheeta and Nuru; using the skills she learned in the jungle, Jane was able to help her friends survive until Tarzan was able to save them. The trio was last seen thanking Jane for quite the visit before bidding farewell to her and Tarzan.

They return in this first season episode, where Greenly is revealed to have a fiancé named Henry, a geologist who studies rocks and minerals, plus earthquakes and plays the oboe, though Eleanor and Hazel find him unappealing. During the journey to Africa their boat suddenly started sinking (it's never explained how this happened) and they set out a call for help. Luckily Archimedes had received their signal and him along with Tantor, Terk, Jane and Tarzan head for the coast. Tarzan himself dove into the water and swam over, managing to save them all and drive off a marauding shark who attempting to make a meal out of the visiting humans. After their near-death experience was behind them, they explained that they brought Greenly's fiancé Henry to the jungle to "toughen him up". Jane, in particular, found Eleanor and Hazel's un-acceptance quite provoking. Tarzan did try to teach Henry his animalistic skill but Henry didn't succeed at all. He supposedly intended to dump Greenly after she admitted Eleanor and Hazel's contempt, but an earthquake interrupts and created a tsunami, they survive the tidal wave with Tarzan and Jane's boat but ended up lost in the jungle with Henry. The geologist showed exceptional ingenuity and resolve in helping the group survive until Tarzan could save them (again), including snake-charming a black mamba with his oboe and wrestling a crocodile (and winning!). After they got back to the tree-house the girls apologize to Henry for trying to mold him into something he's not and he and Greenly reconciled.

She is the short chubby women and wears blue-colored cloths. She seems to have a crush on Tarzan herself as she admitted she envied Jane and even asks if Tarzan had a brother or cousin even though she denies her affections (and while Tarzan clearly doesn't have any siblings biologically, it is a mystery if he does have long-lost relatives at all). She could also be extremely talkative as Robert Canler called her the biggest gossip in the British Isles in "Flying Ace", which is how Robert knew where to find Jane.

She is middle in height between Eleanor and Hazel and wears pink-colored clothes. She has a tendency to leave her sentences unfinished.

She is tall and skinny and wears green-colored clothes. Whenever Greenly leaves her sentences unfinished Eleanor is often the first to finish them.

Community content is available under CC-BY-SA unless otherwise noted.
Advertisement